Plumas County Sheriff's Office
Inside the Fire House: The Little Dispatch That Could

The Sheriff’s Office (SO) has been dispatching emergency services in the region for decades. In the 1970’s and 80’s, the SO dispatched local FD’s by calling an automated “ZETRON” phone paging system and giving a one-way message. There were no two-way radio repeaters to talk back and forth. Responding volunteer firefighters would acknowledge the call by telephoning dispatch. In the 1990’s the County Office of Emergency Services (OES), then under the direction of Quincy Fire Chief Andy Anderson, worked with the County Board of Supervisors to develop and install a two-way countywide radio communications system specifically for Fire and EMS agencies. This system was in place in 2000.

Since that time the SO has provided dispatching services for most Plumas County Volunteer FD’s and the Plumas District Hospital Ambulance Service. The remaining FD’s in the Lake Almanor region have their calls dispatched by the Susanville Interagency Fire Center, a joint operation of CAL FIRE and other federal, state, and local agencies.
SO Deputy Mike Grant has worked with Quincy Fire Chief Robbie Cassou and others over the past decade to upgrade the system, in not only capabilities but also in reliability and quality.

Grant also heads up the computer systems (IT) for the SO, is the 911 System Coordinator, the County Search and Rescue Commander, and currently serves as Chairman of the California Northern Planning Area for SIEC, the State-Wide Interoperability Executive Committee, an emergency communications coordination group. Seven SO dispatchers work under the direction of SO Communications Supervisor Becky Grant. Today’s dispatchers are Jeanette Cammack, Cassie Cooper, Wynae Hagwood, Pamella Kjelmyr, Renee McKinney, Zoella Stancer, and Jamie Strotman. They provide not only law enforcement communications, but also serve FD’s, Ambulance Services, the DA's Office, County Public Works, Animal Control, and the Plumas County Sheriff's Office and Search and Rescue team, among other groups.

“Becky and her dispatchers do a wonderful job under very challenging circumstances and a very limited budget…” said Fire Chiefs Association President Ed Ward, “…it can be a very difficult job at times.” Due to the need to cover every hour and day of the year, there is usually only one dispatcher on duty at a time. This means that they may be juggling multiple calls and incidents, while needing to remain calm and professional. In addition, incident volume is up over 10% this year compared to last, with over 12,000 incidents dispatched for the various agencies.

“We now encourage our firefighters to visit the dispatch office to gain a better sense of what the challenges are,” said Ward, “otherwise they may think that the dispatcher only has to serve their needs and misunderstand if there are issues like delays in communicating.” For example, a tour by a fire academy group was interrupted by the dispatcher having to coordinate agencies to search for a missing child in Portola. While the child was later found and all ended well, the visitors could see how one complicated incident can at times be almost overwhelming to coordinate.

“Thanks to the great work of Mike and Becky Grant and the dispatchers, Plumas County Sheriff's Office serves as a role model for other agencies by providing efficient, pleasant, and cost-effective communications for multiple agencies through one low-cost dispatch center,” said Cassou, “They are on the All-Star Team in Plumas County Emergency Services.” 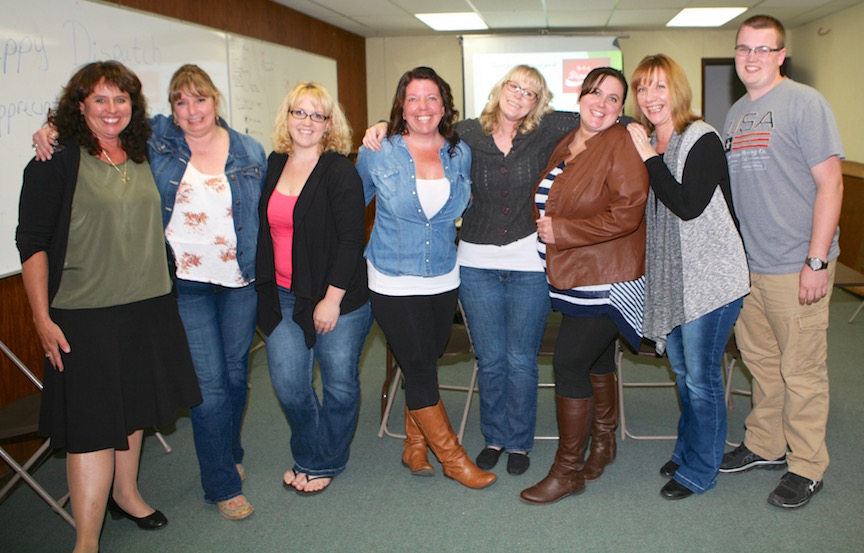