Steve Tolen died peacefully at his home with his family at his side on October 6th in Quincy, California at the age of 67.

Steve was born in San Francisco, California on March 13, 1950 and resided in San Mateo and Hillsborough until graduation from Burlingame High School in 1968. While still a senior in high school, Steve joined the United States Naval Reserve. Following graduation from high school, he went on to training as a hospital corpsman. Upon his Honorable Discharge from the Navy Steve had attained the rank of HM3.

As early as the 4th grade, Steve wanted to become a funeral director, and this ambition led to his ultimate meeting with Andy and Gayle Anderson in 1965. They took him under their wing. Immediately following his discharge from the Navy, Steve moved to Chico, California and began his lifelong career in Emergency Medical Services,  working for Chico Ambulance Service back in the days of Cadillac Ambulances. During this period, Steve also worked in several capacities at hospitals in the Chico area, as well as going to Butte College at night when the campus was still housed in portable classrooms in Durham.

1973 brought Steve back to Quincy, in order to operate the ambulance there for Chico Ambulance. Steve also began what would become a long career with Plumas District Hospital. Steve also began serving his apprenticeship as an Embalmer, under the tutelage of Andy Anderson. This marked the beginning of a long relationship serving in the funeral service under Andy Anderson, Troy Smith and John Fehrman. Steve found a great deal of personal satisfaction in being able to serve families who had lost their family members or friends, through his work in the funeral service.
On the medical end, Steve worked in a variety of capacities at Plumas District Hospital and served as their Emergency Room and Ambulance Supervisor from 1976 until 1990. During this period Steve also became an EMT II, one of the first in the Northern California region. Steve left PDH but returned again in 1993, this time as a Paramedic. In addition to this Steve also taught the EMT program at Feather River College beginning in 1987, until 2012.

Steve retired from Plumas District Hospital as their Safety Officer in 2012 due to health issues, but remained active as a consultant with an emphasis on emergency preparedness and Joint Commission issues. Steve was also actively involved in regional EMS as a member of the Board of Directors of Nor Cal EMS from 1976 until 1990, serving as President in 1981. He was asked to join the board again as a Member at Large and served as their Chairman until his passing.

Steve was always actively involved in the community, including serving on the Quincy Volunteer Fire Department for many years. Steve also was actively involved in the Quincy Lions Club, and served as the club's president for two years.
Steve is predeceased by his parents, Dr. and Mrs. William Tolen, as well as his beloved grandmother Elsie Frost, "Bamma", who was the light of his life.

Steve is survived by his sister Carol Tolen of Mountain View, Ca, and numerous cousins, but most notably his cousin Jim Foster of Santa Rosa. Steve is also survived by his six wonderful children who made him especially proud, including his daughters Debbie, Andrea, Stephanie, Sierra and Ashley and his beloved son Steven. Steve was blessed with seven grandchildren, including Bailey and Kasey Doll of Discovery Bay, Steve Tolen III of Quincy, MacKenna and Sterling of Quincy and Tamara and Alexis Mitten of Chico.

A very large celebration of his life was held at the Plumas County Fairgrounds, Serpilio Hall, on Sunday, October 15, 2017, followed by hors d'oeuvres and in keeping with Steve's wishes - wine. Three Medical Care Helicopters were present, along with many fire department fire engines and ambulances from Butte and Plumas Counties. Several hundred family and friends attended. Rest in peace Steve! 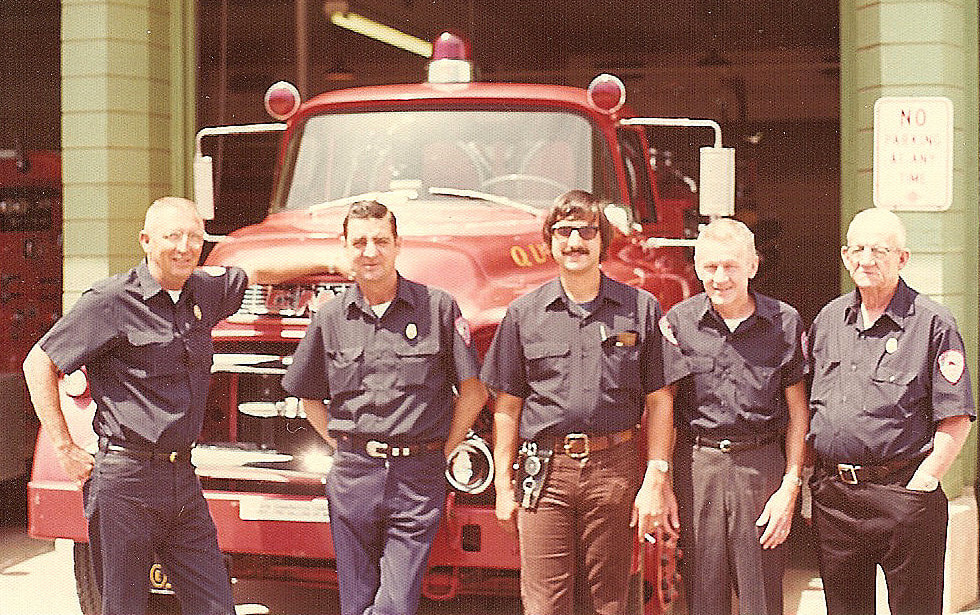 A photo from the 1970's in front of the Quincy Fire Station. (l-r) unknown tbd, R.K. Dunn, Steve Tolen, Felix Donnelly, unknown tbd. The engine they are standing in front of is Quincy Engine 5, a 1955 GMC Vanpelt.

Below: This is the video that was played at the memorial, except for the choices of music. His favorite music was used at the private memorial, while licensed, royalty free music has been used for this version since it is publicly available for view.

To view in full screen, click on the symbol in the lower right, just to the left of the word vimeo. 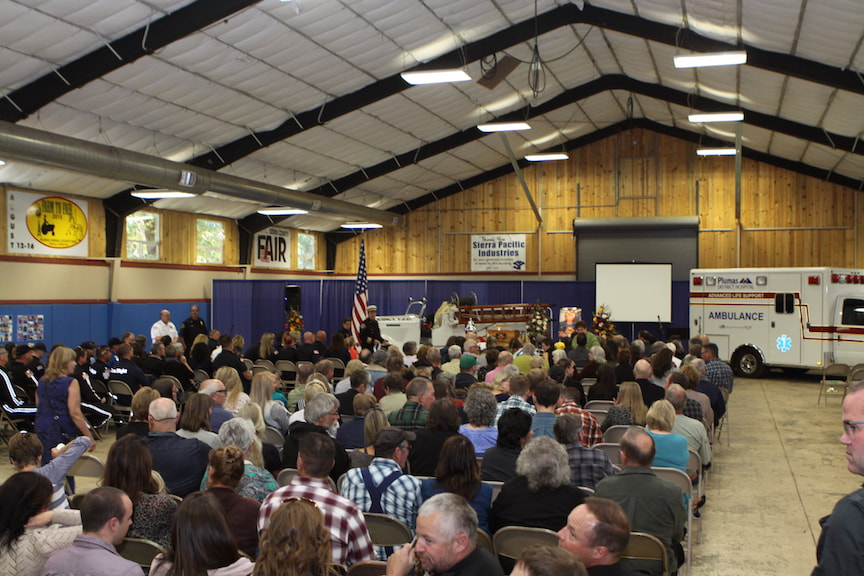 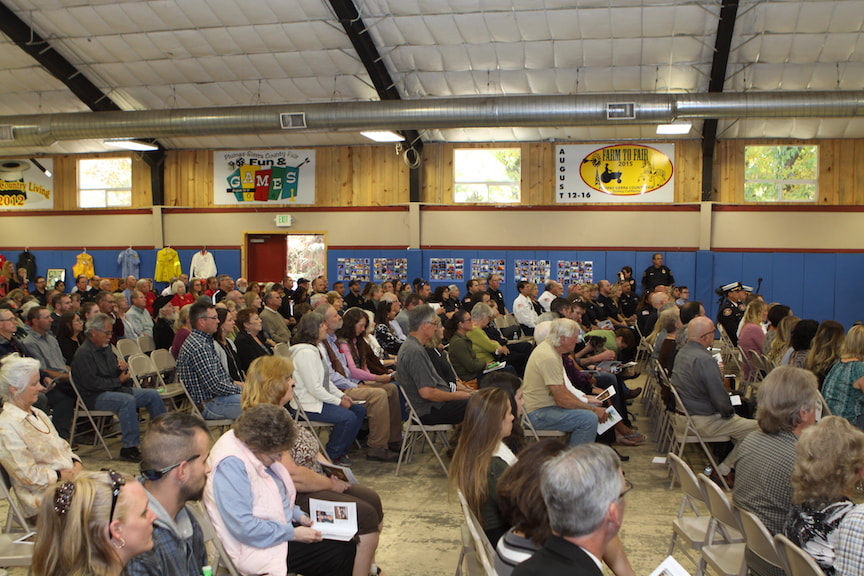 Photographs below from the memorial are courtesy of Kim Eliason.

Coming: Video from the memorial.