The Steve Tolen Leadership in EMS Award was established in 2014 to honor Steve's many decades of outstanding contributions in Emergency Medical Services in Plumas County.  He came down with cancer in 2010, and the following article is from the Plumas News about a then upcoming benefit event to help with Steve's medical care costs:
​
Community Appreciation for Steve Tolen
by Laura Beaton, August 29, 2012

"Steve Tolen is faced with the toughest battle of his life. Diagnosed with prostate cancer, he underwent surgery in September 2010. Now the cancer has metastasized to his bones. When he woke up after surgery, his friend Shawn Webb was one of many by his bedside. Webb had been battling brain cancer for over a year, but was there to support Tolen despite it. Sadly, Webb lost his battle in Feb. 2011. Tolen carries several items in his left front pocket, including a coin from the Cook Islands given to him by Webb. 'A little piece of Shawn is with me all the time.'

Currently Tolen is undergoing a clinical trial at UC Davis Medical Center. The trial uses everolimus, a drug that interferes with cell- signaling pathways and deters cancer cell growth. One of the biggest side effects of the drug is oral ulceration from ingesting the pill itself. Tolen, who derives great enjoyment from teaching, came up with a protocol for ingesting the drug without it making physical contact with membranes inside the mouth.

From his vast experience in the hospital world, Tolen knows the power of jello. So rather than take his pills surrounded by a spoonful of whipped cream, like other patients had tried with limited success, he began to take his pills inserted into a big spoonful of jello. 'Jello shots,' he joked. His doctors have begun recommending this procedure to other patients. When asked if there was one thing he would like to say to Feather Publishing’s readers, Tolen paused for a long moment. There were so many thoughts coming to his mind, he said, but he did zero in on two messages to share with our readers. The first is to take advantage of the biannual health fair at the hospital. He encourages all people to participate. The fair provides low cost screenings that can discover things that really make a difference.

'The fair has saved lives. It has probably prolonged mine, but it can save others.' The second message Tolen wanted to impart was for folks to appreciate their community. 'I feel so blessed to live here,' Tolen said, 'I feel like I’m the luckiest man alive. The outpouring of support is almost hard for me to comprehend. It’s humbling.' Tolen has been a fixture in the Quincy Community since the early 70s. After a two-year stint in the Naval Hospital Corps in San Diego, he attended Feather River College from 1970 – 72. As early as fourth grade, Tolen wanted to be a funeral director. When he came to Quincy in 1965 as a teenager working at a summer camp in Keddie, he met Andy and Gayle Anderson, who owned and operated Anderson Mortuary. Andy was also the fire chief back then, and inspired Tolen to become a firefighter and volunteer on the Quincy force for 17 years.

An emergency medical technician and paramedic, as well as a certificated teacher of many medical related subjects, Steve has served Plumas and neighboring counties for most of his adult life. At present he is Safety Officer for Plumas District Hospital, and started teaching EMT classes at Feather River College Aug. 20, his 25th year of instruction there. From training staff in first aid and CPR to working the High Sierra music festival and volunteering at Quincy High School football games, Steve has been a friendly, capable, generous presence in Plumas County for four decades.

He has come to the aid of countless people and saved many lives. His students have gone on to become professional health care workers all over the country. Tolen has six children and three grandchildren. His youngest grandson Steve Tolen III rode with him in the parade where he was Grand Marshal. Tolen calls his family 'very extended.' When he had a heart attack in 2006, he woke up 'surrounded by wives and kids. The poor nurse was absolutely dumbstruck.'

Steve is a self-proclaimed workaholic, often working 16 hour days, seven days a week. At least he used to. Now he is forced to take it easy. He thinks this will be his last year of work. That will leave Tolen, age 62, caught in no man’s insurance land – too young for Medicare, and unemployed. Which brings us to the upcoming community benefits to help pay for Tolen’s medical expenses.

Plastered all over town are banners and flyers advertising a weekend of events Sept. 7 – 9, 2012 to raise funds and honor Tolen’s many heartfelt contributions to the community. The latest event added to the already busy weekend is a Filipino dinner at Tolen’s church, St. John’s, Sat. Sept. 8 at 6 p.m. Here’s what Steve Tolen wrote as a tribute to his departed friend Shawn Webb: 'In the end, we will remember not the words of our enemies, but the silence of our friends.'  - Martin Luther King Jr.
'I will always remember you my friend and feel blessed by the gift of your friendship. You and your beautiful family are in my thoughts and prayers.' Steve Tolen is a well respected and much loved member of the community. You are invited to join his many friends and family in honoring and giving him what he has given so many – love, caring and assistance. Let Steve be on the receiving end for a change.

"Quite simply, Steve Tolen was the reason that Robbie and I were able to move up here from Los Angeles County.
Steve recruited Robbie and me to work at Plumas District Hospital in 1989. When I think of the old days of EMS in Plumas County, I think of one thing:  Whenever we needed help for anything, either at the hospital or with the ambulance, I remember seeing Steve come putt-putting up Bucks Lake Road in his VW bus with the pop-top. Most of the time he would just show up when we needed him, whether or not we called. He always had his radio on, monitoring everything that happened in the county. Sometimes he would have a child with him…all of his kids got used to riding in the ambulance, because we used to take it home with us for after hours responses.

I still get the same feeling whenever he shows up for anything…relief that he’s with us because he always knows what to do and who to call to fix whatever is wrong. He is an incredible source of knowledge about EMS and Plumas County.
I remember riding up the canyon with him on the way back from one of the quarterly EMS meetings we attended in Redding. He so loves this place in the world – he knows every landmark in the Feather River Canyon. That’s how I learned where things are, up and down Highway 70. He told me about the dogwood that we would see around the next bend in the road. When we got to the place where Bucks Lake dumps into the Feather River, he told me that it was remotely controlled. Little details that I remember to this day.

Steve used to teach CPR to the community at Moon’s on Monday nights when the restaurant was closed. I don’t know how many lives he has saved either with his own hands or by way of his students’ hands because of his classes. I will be eternally grateful to Steve for all that he has done for Robbie and me and for the community. I doubt that there is anyone who has given as much as he has, as selflessly as he has. I still call him when I need to know something or am unsure about my sources. I know that he will know."

Following his recognition by his peers in February, Steve received statewide recognition from the California Emergency Medical Services Authority:
​
"Steve Tolen is being recognized for his 40 years of dedicated and sustained EMS service, demonstrating unique insight and knowledge of California’s rural EMS issues, providing statewide leadership and promoting community volunteerism. Steve’s leadership in the north state has greatly improved disaster preparedness and the quality of patient care by increasing the number of ambulances and amount of patient care equipment available in rural areas. Steve’s volunteerism and willingness to tackle tough issues has markedly improved emergency medical care and in the north state."

Update, December 2016: While he has struggled with his health challenges, Steve is hanging in there, and continues to Chair the Plumas County Emergency Medical Care Committee. He has continued to teach and help wherever he can, remaining true to his nature. A new ambulance for Plumas District Hospital was funded reecntly through community fund-raising, and is now in service. It is dedicated to Steve Tolen and the Leonhardt Family for their generosity. 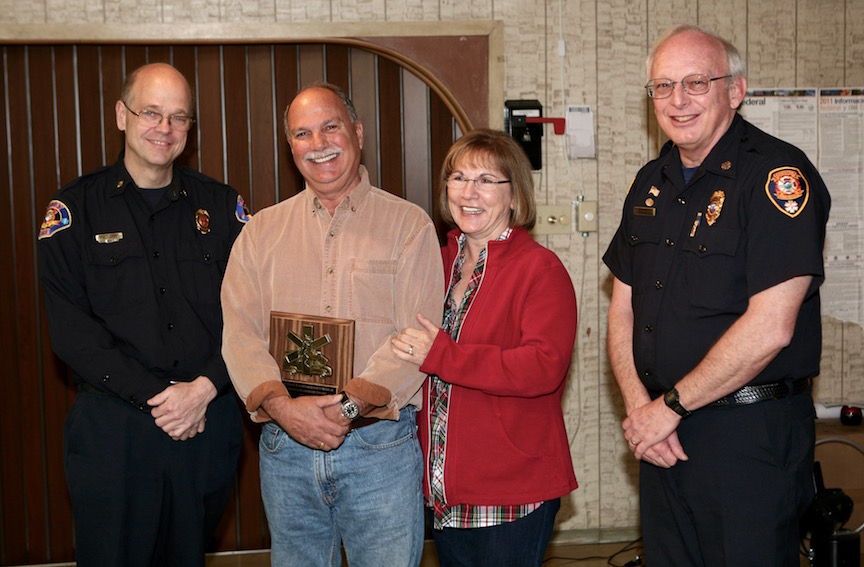 (l-r) Chief Robbie Cassou, Peter Beck, Totsy Beck, Chief Joe Waterman following the presentation of the 2015 award to Peter at the PCFCA meeting in February of 2016. 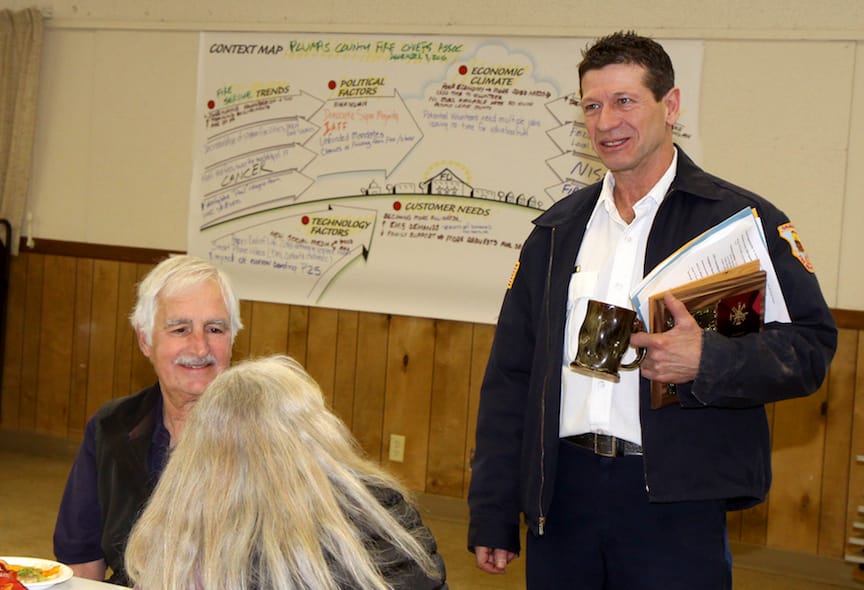 Steve Tolen seated on the left after presenting the 2016 Award to Graeagle Chief Ed Ward, standing on the right. 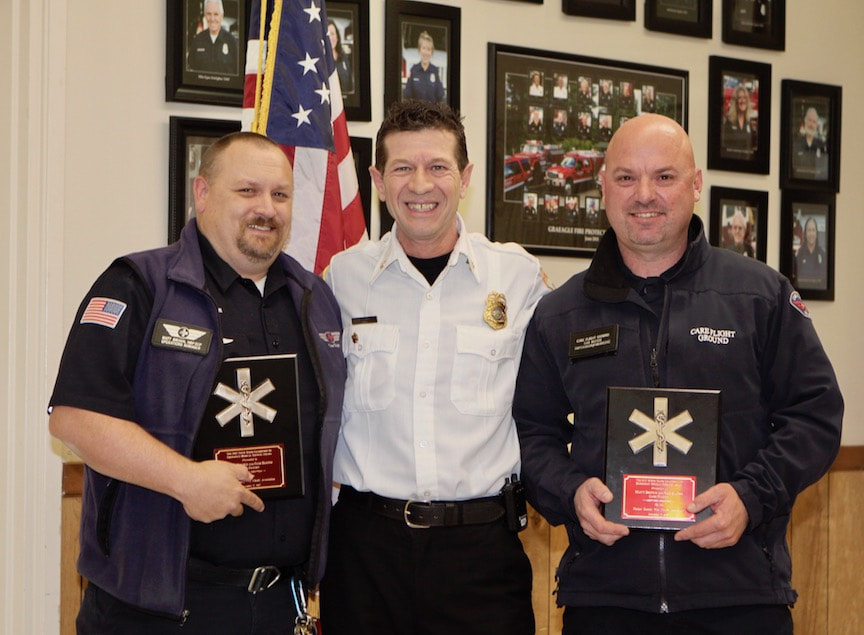